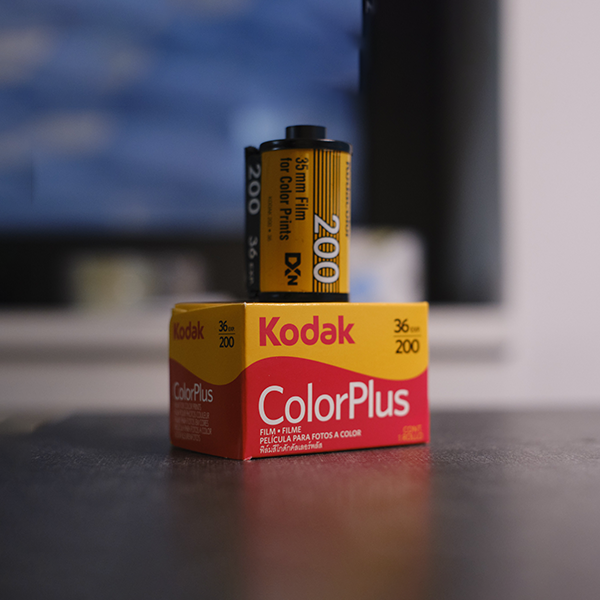 Part one of my journey of developing a film scanner using everything I have.

My family lives in a very humid and hot place next to the sea in southern China, where things simply don’t last long.

I know for a fact that back in my home, there are a lot of my parent’s era films in the family album. I also know that my parents have no interest taking them to a photo shop to digitize them due to COVID. And I bought a ticket to go home this winter, regardless, I will be alone at home for a couple days quarantining.

So I thought, isn’t this an awesome time to digitalize all the film before they all rot in the time?

In order to do this, I need a lens to shoot macro. Fujifilm has a couple macro lenses, the 60mm Macro, but I don’t imagine myself doing a lot of macro work in my daily life and cannot justify such a purchase.

I can also buy a vintage lens like the Canon 50mm Macro, but vintage lens does not have such as good color reproduction like modern lenses. I do own the Canon FD 50mm F1.4 SSC, and I really liked it for the vintage looks, but I was looking for a lens that is sharper than these vintage lenses.

Then I found a solution to best utilize my kit, which is to use an extension tube to make the 35mm shoot macro. According to the Magnification of the macro extension tube sheet from Fujifilm, Using a extension tube (MCEX-11 or MCEX-16), which gives an extra gap between the sensor and the lens mount (11mm or 16mm), will enable a lens to shoot macro. 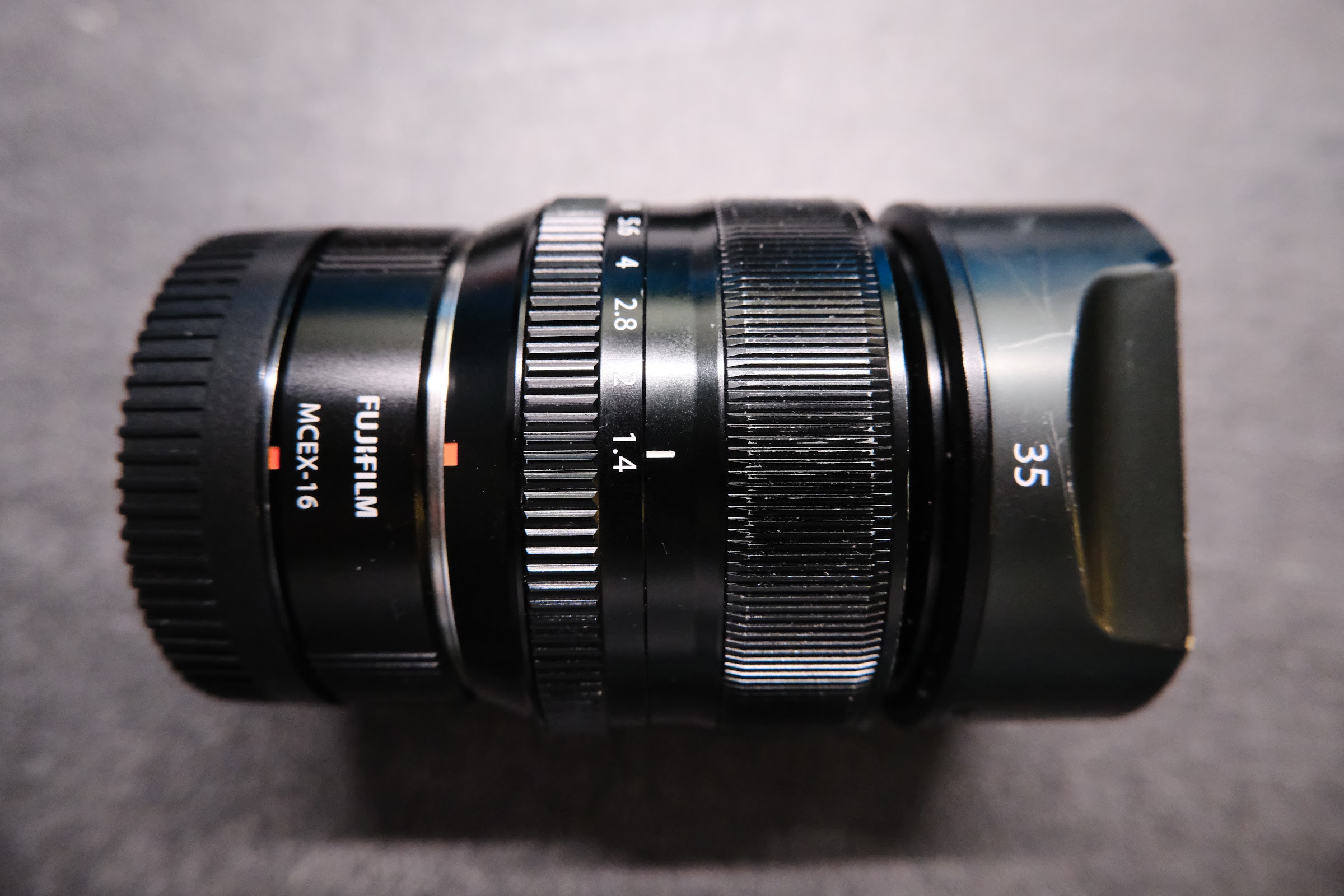 On paper, the 35mm with an extension tube even beats the spec of the 60mm F2.4 by simply adding a tube, but there is a caveat.

On one hand, you lose some light, and gain some magnification (The 35mm now behaves more like a 60mm). On another hand, the range of the camera being able to focus is significantly reduced.

I got an used 16mm ring (MCEX-16) from ebay with a really great deal of roughly 70$, so I will be using the 16mm ring. However, I do think the 11mm ring is probably going to work in more situations than purely film digitization.

I shall demonstrate the range that the camera can shoot using a Kodak film box shot at F8. Because the farthest the camera is able to shoot is coincidentally the same size of a box of film, and it fits the context of ealing with film. 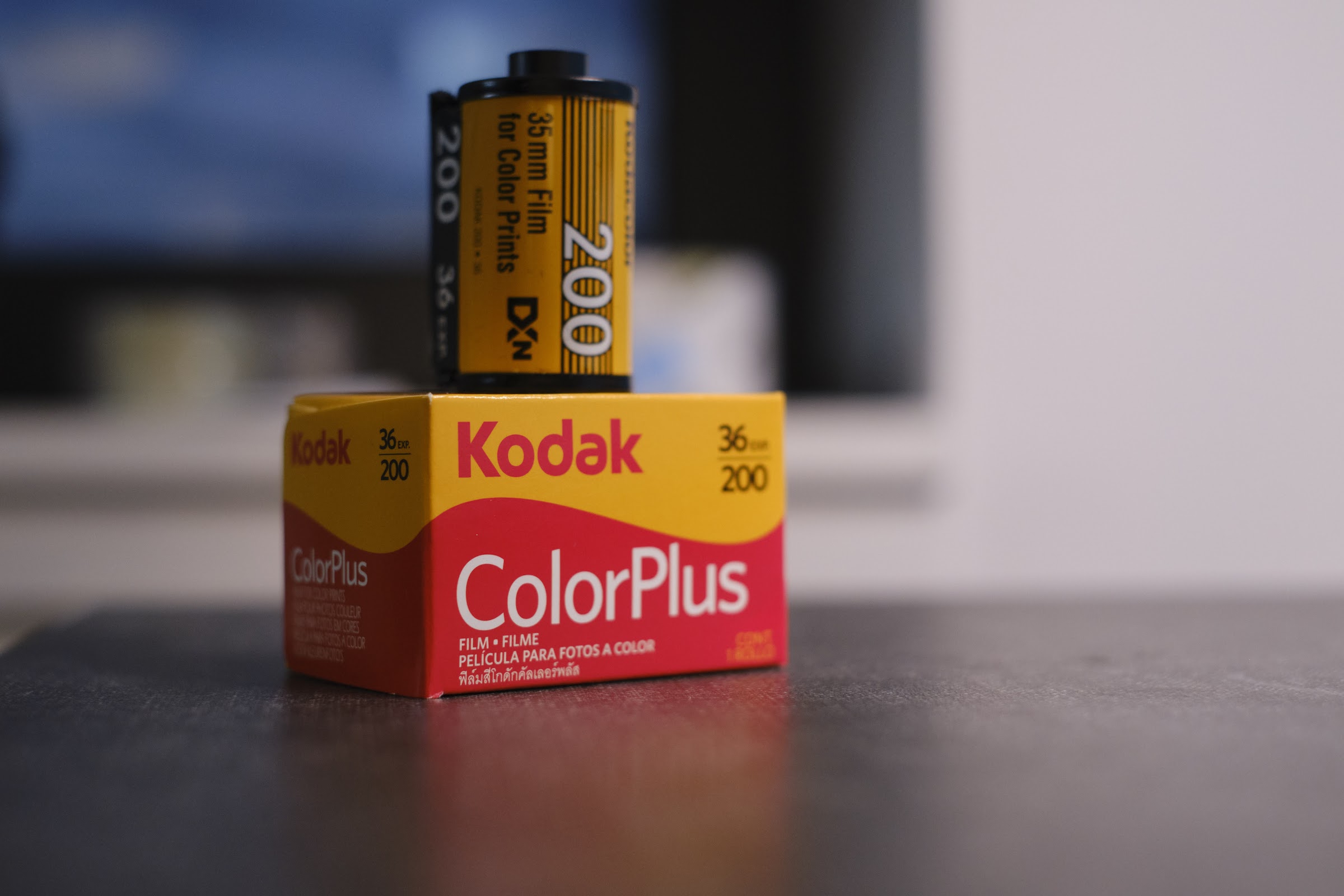 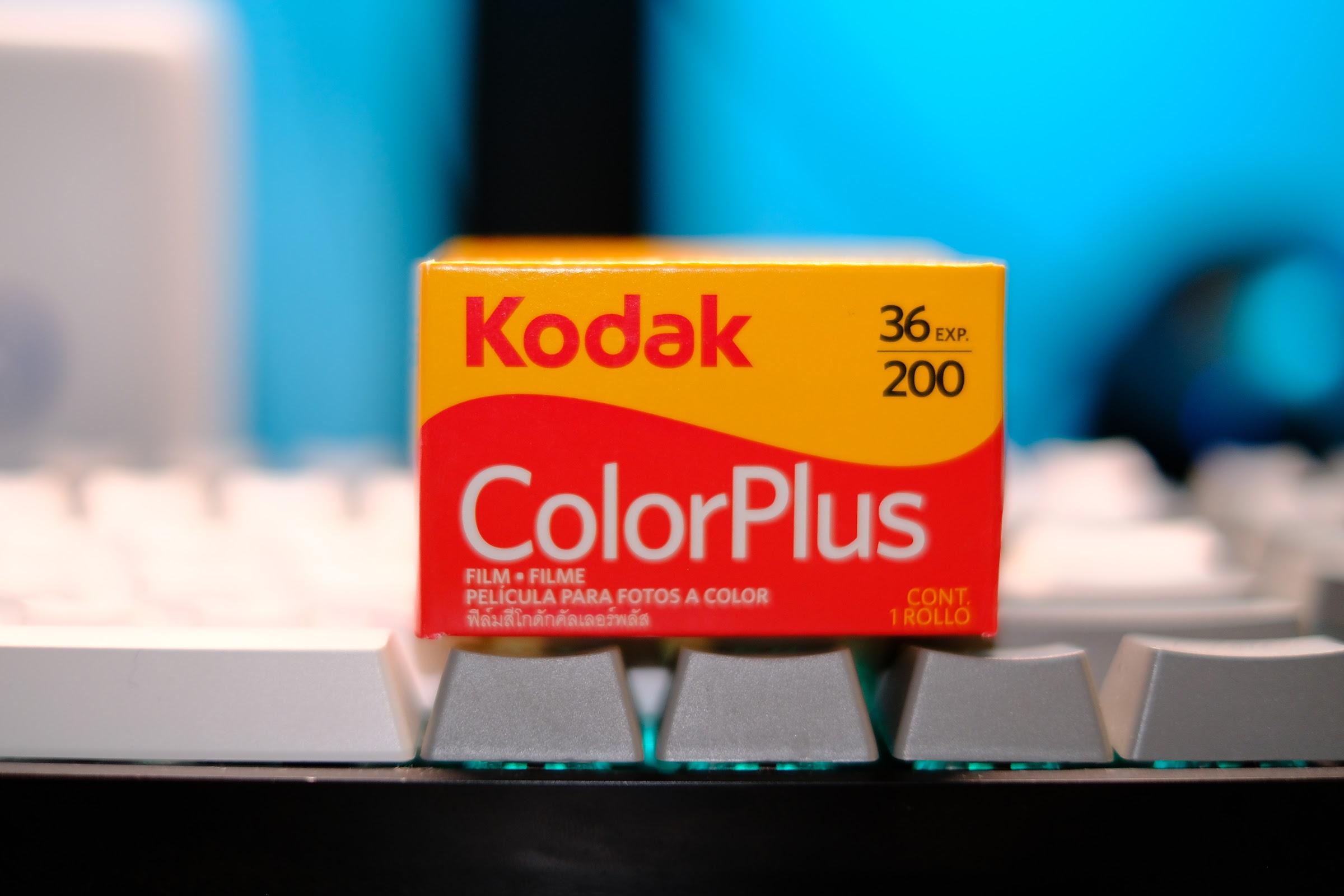 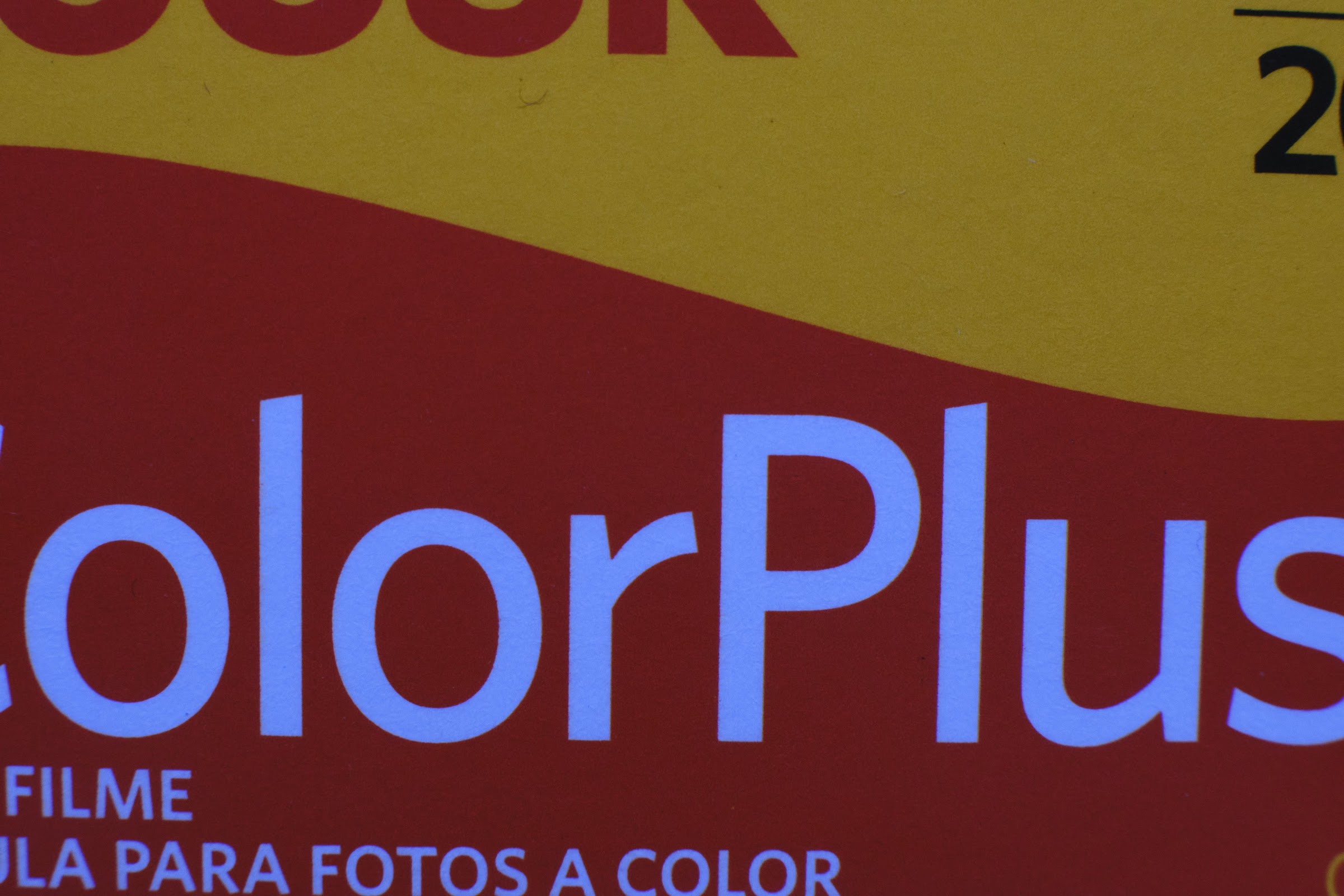 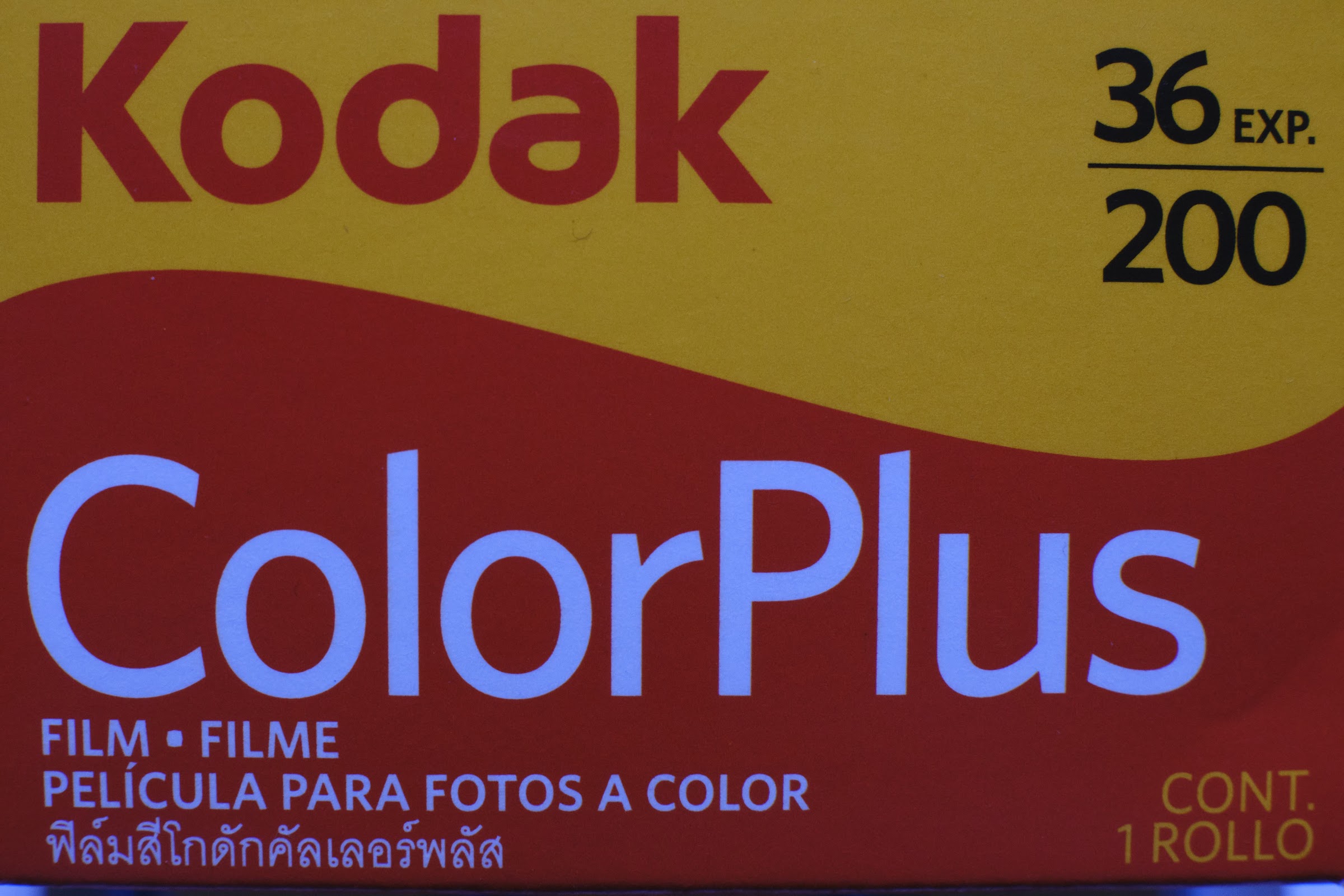 I am measuring three things. 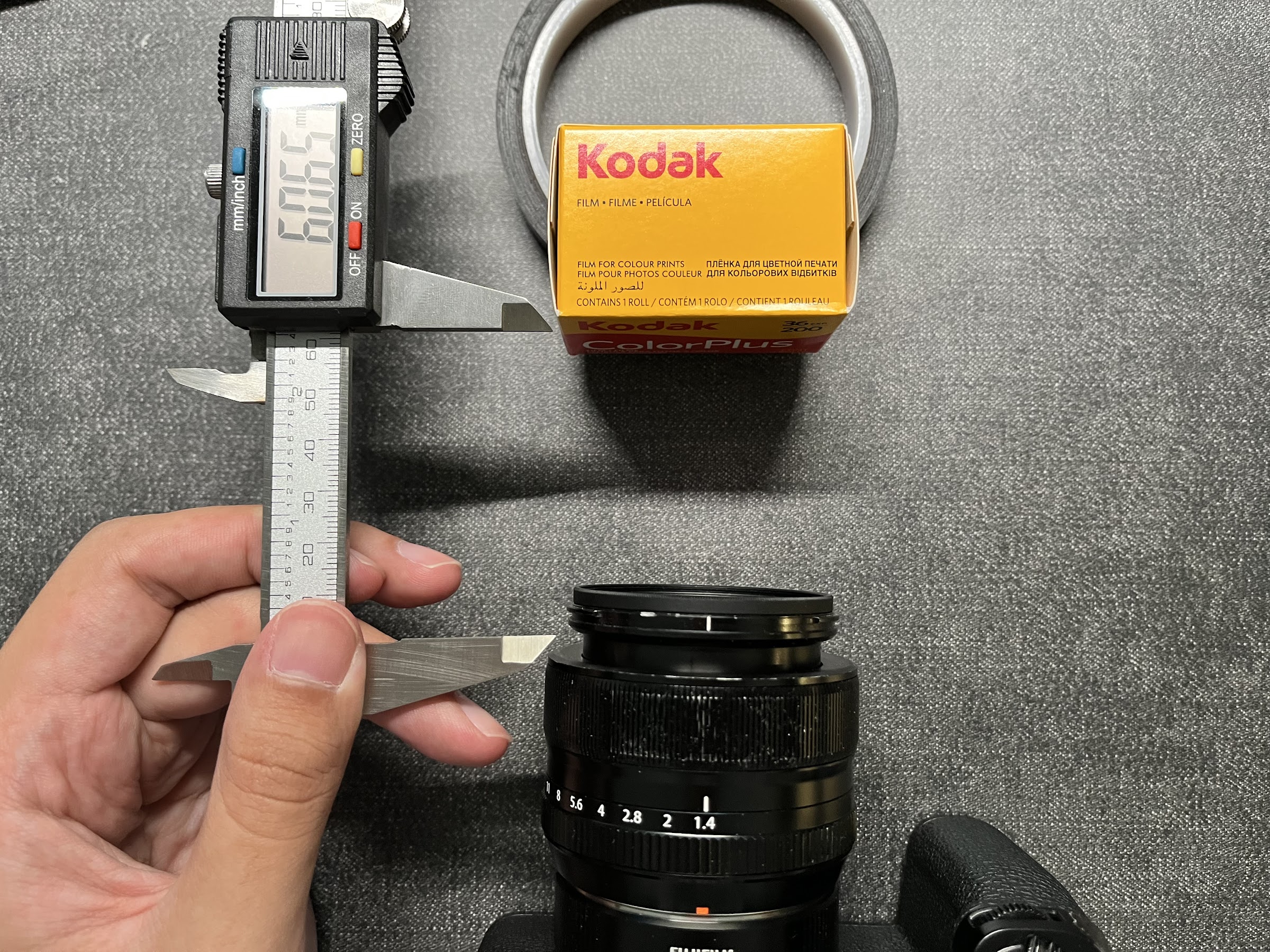 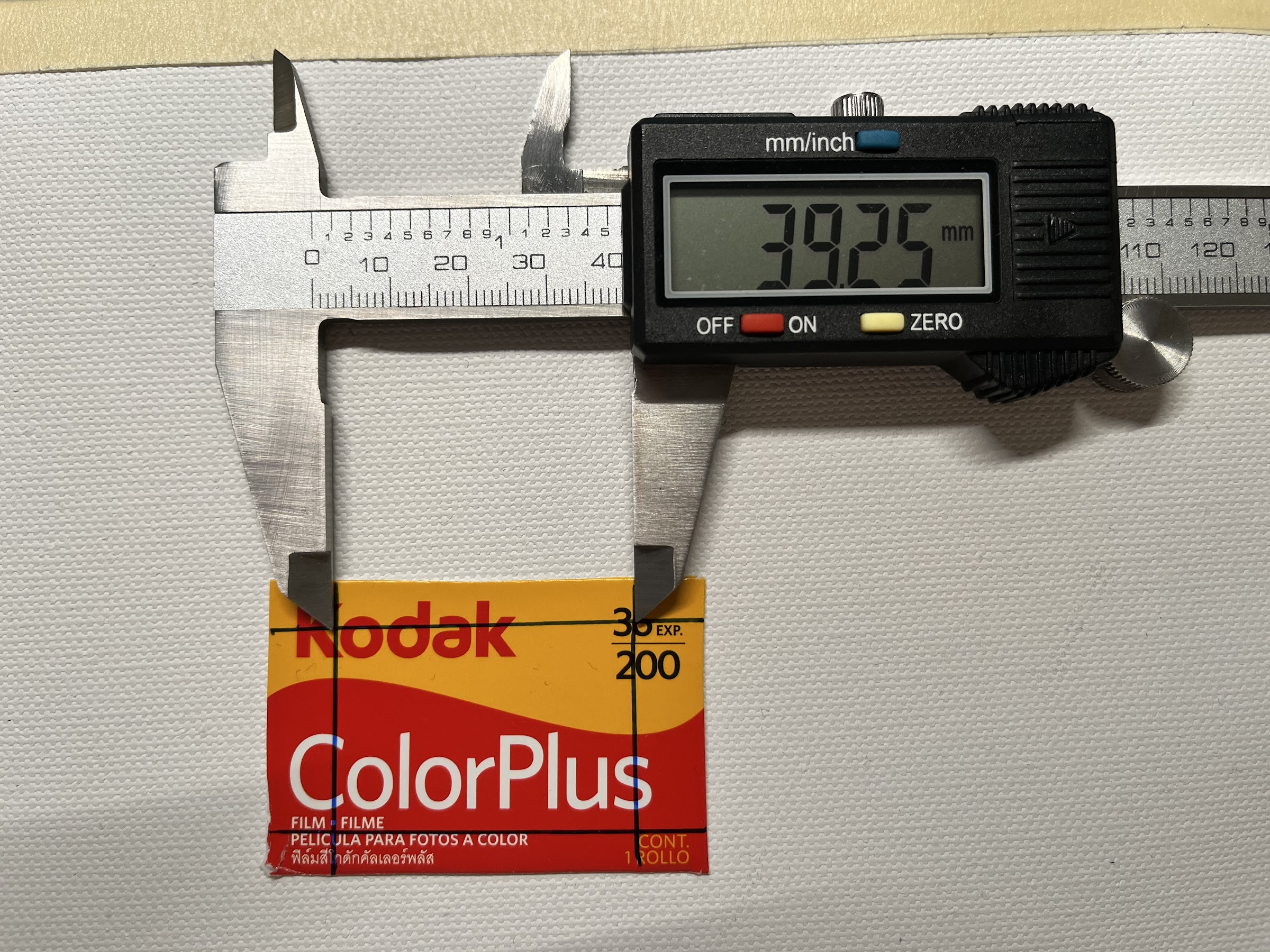 The closest distance between the camera's bayonet and the flat subject. 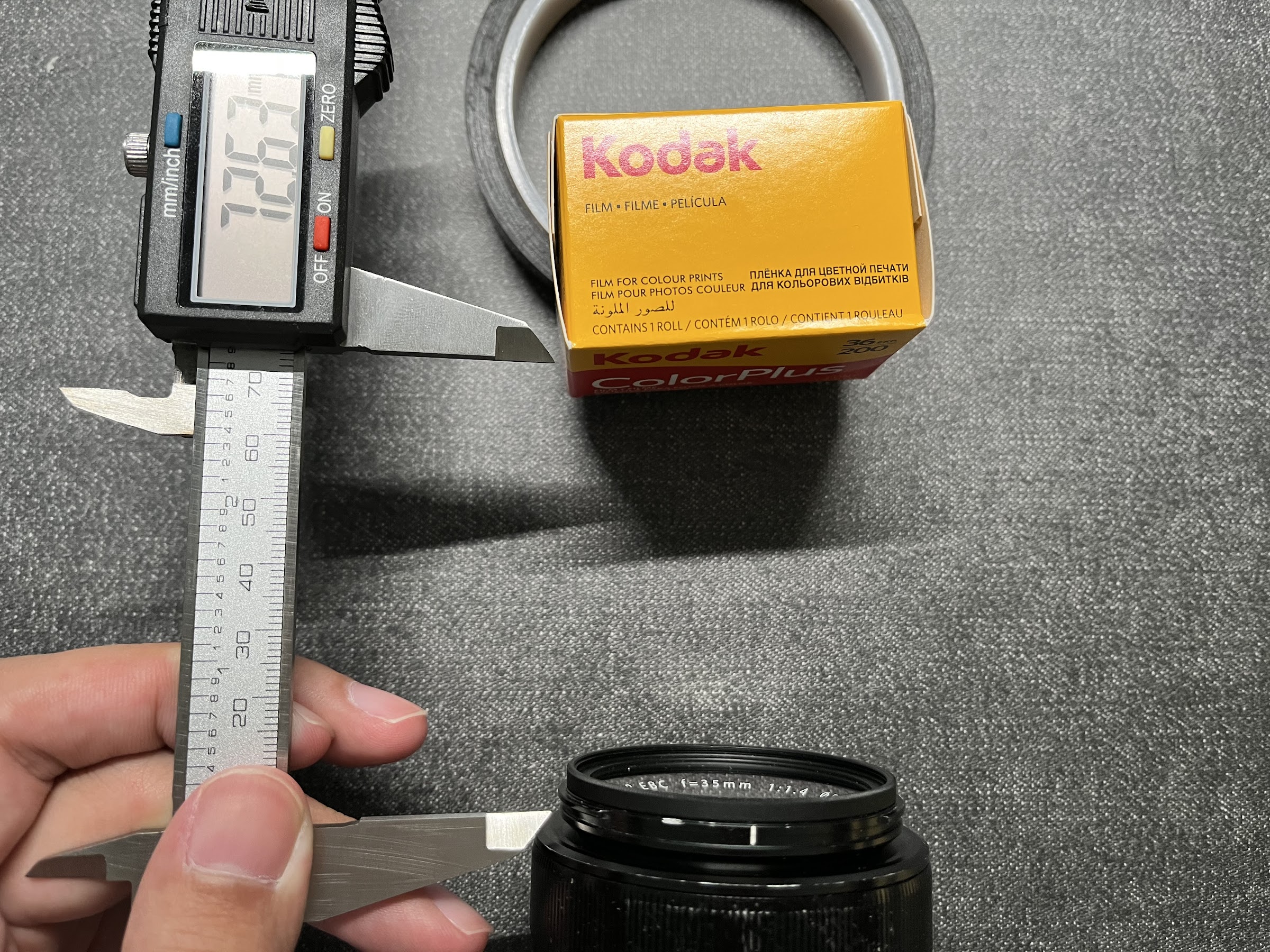 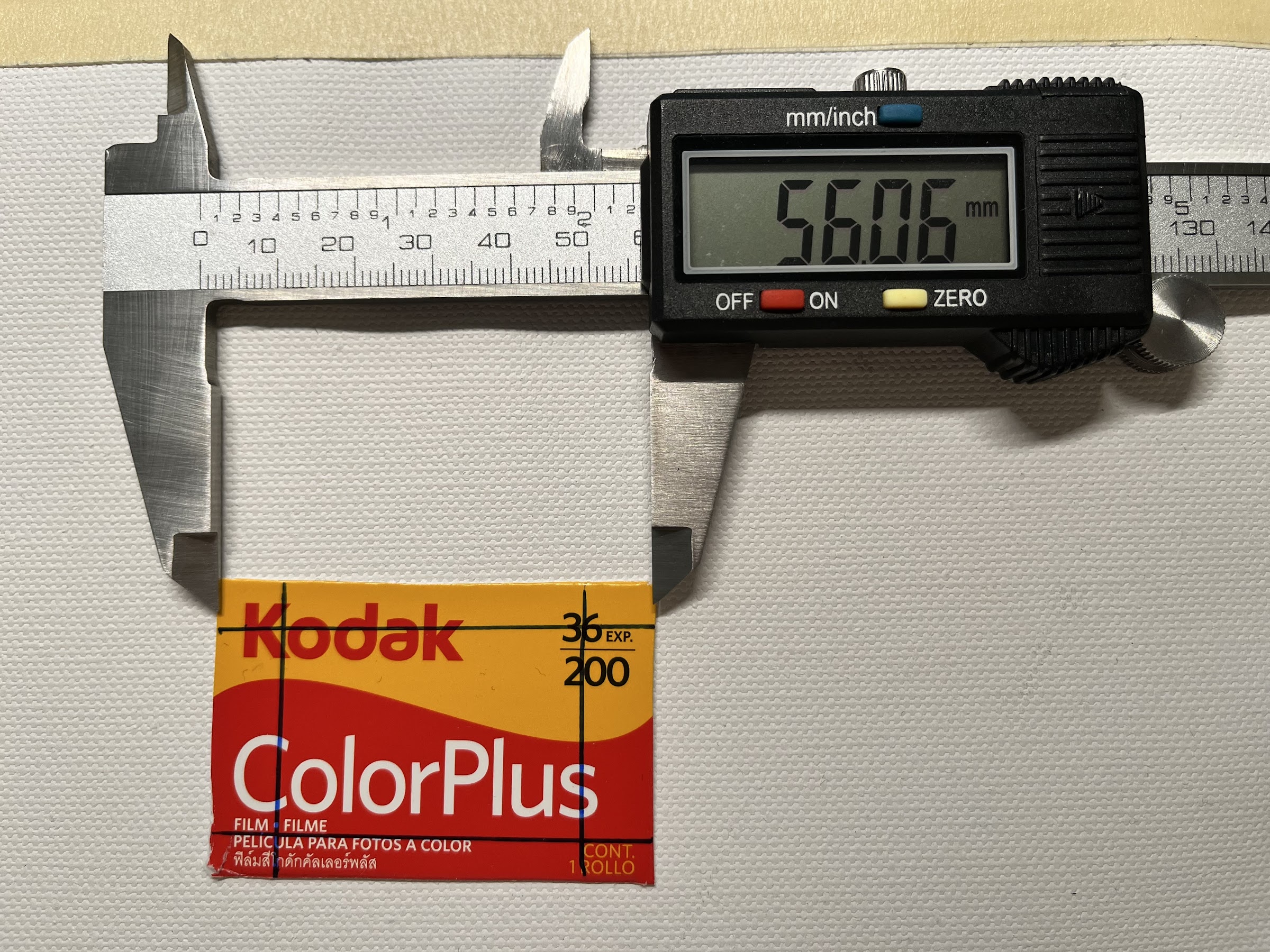 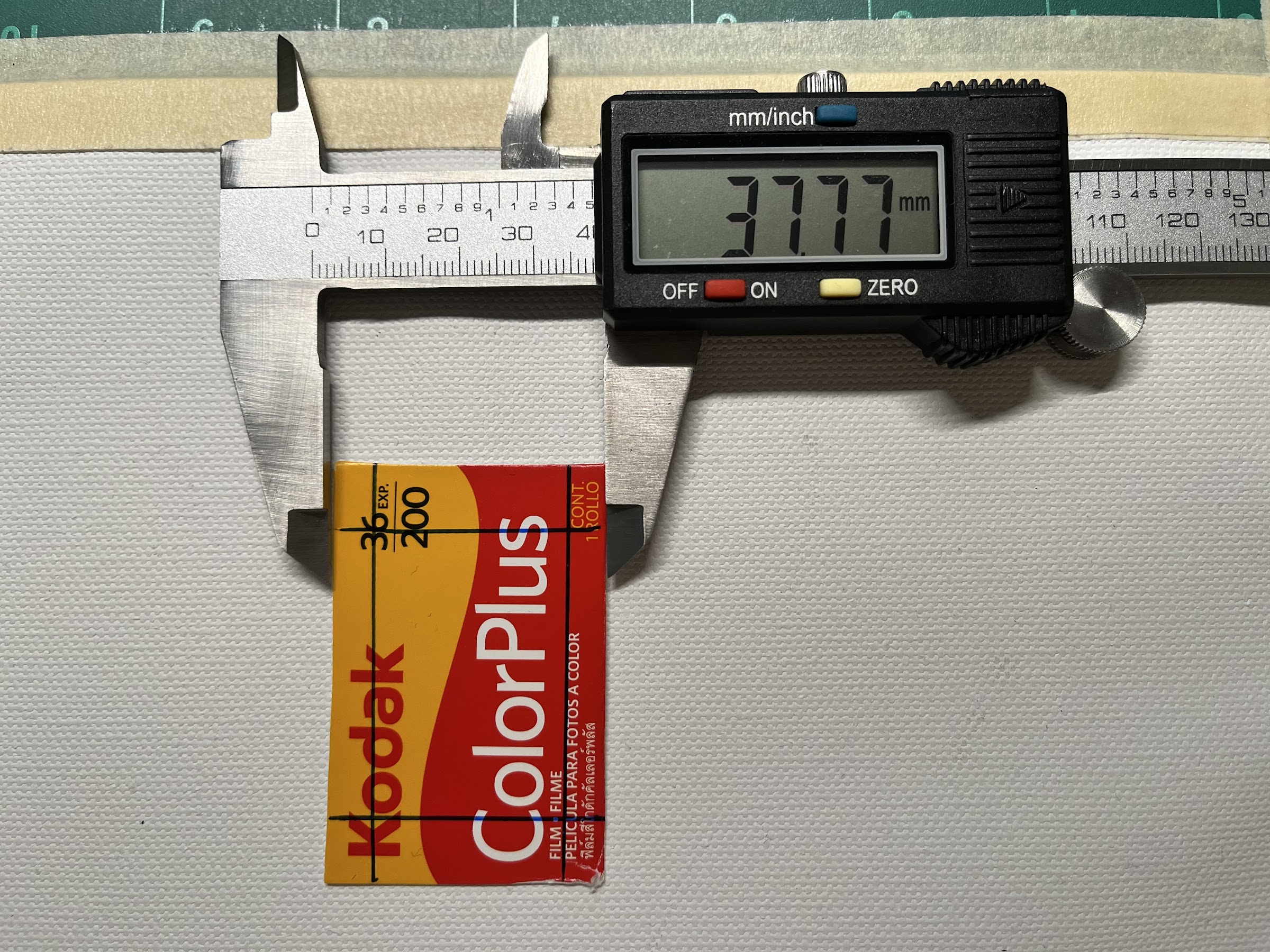 The farthest distance between the camera's bayonet and the flat subject.

Here are the approximate values I got from my measurement:

We can safely say the image on the film will be within the range our lens can focus on with an extension tube.

With this measurement, we can conclude several things:

With the measurement out of the way, time to CAD up and 3D print some prototypes! 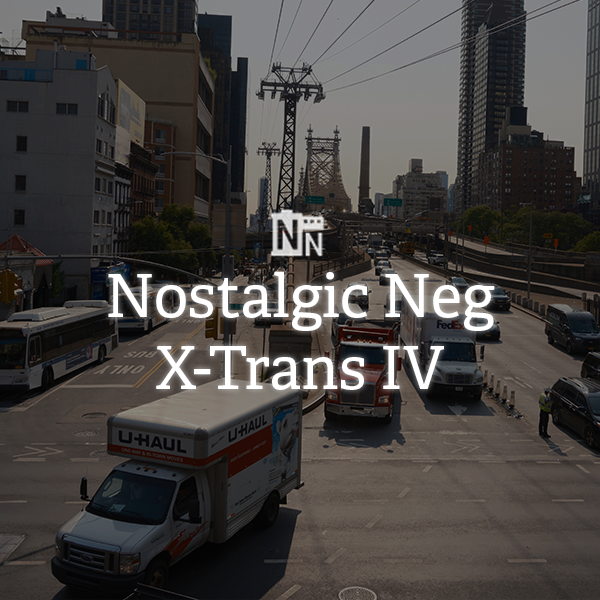